Driven by the power of independent thinking, the Sub Pop zine’s particular field of interest was artists from the Midwest and Northwest. Punk and new wave fans in major cities were puzzled, surprised that there were enough bands in those regions to devote a column, let alone an entire fanzine. 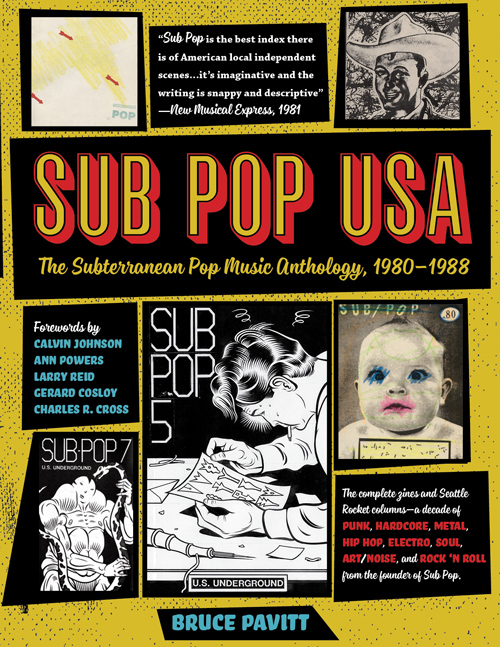 Even more puzzling was the exclusion of artists like the Clash, Gang of Four, Blondie, or PIL, solely because of their major label associations. Early issues featured impassioned rallying cries for local action that make more sense than ever today, alongside early published artwork by Linda Barry, Charles Burns, and Jad Fair.

From Beat Happening and Pell Mell to early records by the Beastie Boys, Metallica, and Run DMC, Sub Pop was a 1980s independent music bible, written with a diverse appreciation for happening scenes across the USA. In 1986, Pavitt put his ideas into practice, launching Sub Pop Records with the historic Sub Pop 100 compilation,with records by Seattle artists Nirvana, Soundgarden and Mud Honey to follow. While the Sub Pop Records legacy is today legendary, the groundwork and creative wellspring that put Seattle on the musical map is assembled here for the first time.

“A streamlined goldmine… fiercely indie-minded, ranging in subject from Neo Boys to ESG to Beastie Boys to Metallica.”
—Pitchfork

“A fascinating time capsule of the pre-Internet music industry, and of pre-Amazon/Microsoft Seattle.”
—The Seattle Times

“Before grunge exploded across the globe, Pavitt’s fanzine and his columns for The Rocket were an illuminating source of information about what was happening to independent music during the 1980s. Gathered together in one volume, these reproductions of the original documents read as a vital history of that decade and the energetic, vibrant music that emerged.”
—Edwin Pouncey, The Wire

“Now collected into a comprehensive volume, these writings document the emergence of a subculture that eventually bubbled up to the surface with the popularity of Nirvana and other grunge bands in the early 1990s.”
—Forbes

“Buy it for your unattainable coffee-shop crush.”
—Esquire

“Just as an index of underground bands alone, the book is invaluable. Here, Pavitt tracks small bands from inception to death, celebrating their tiny triumphs and documenting their disasters. He had an eye on it all, and it shows. His words are often the only proper record of many short-lived but amazing bands.”
—St. Louis Riverfront Times

“The book reveals connections between seemingly disparate scenes and artists… [and shows] that artistic revolutions can come from unlikely places.”
—The Portland Mercury

“A fascinating firsthand account of an alternative cultural scene rising from its low-rent roots and gradually coming into its own.”
—Wondering Sound

“We need diverse, regionalized, localized approaches to all forms of art, music, and politics…the most intense music, the most original ideas are coming out of scenes you don’t even know exist. Tomorrow’s pop is being realized today on small decentralized record labels that are interested in taking risks, not making money.”
—Subterranean Pop #1, 1980