He is most famous for creating the Grunge music phenomenon in the early 1990s. Pavitt not only released the first albums by Soundgarden, Mudhoney, and Nirvana, but equally important, built a compelling narrative of the Seattle music scene in the international press that captured
the world’s imagination.

Pavitt was born in Chicago, and grew up in suburban Park Forest, Illinois, the second of six kids to Robert and Ruth Pavitt. He became interested in music at a young age (Motown in neighboring Detroit was a huge influence) and showed early signs of being a music entrepreneur. At age 9, he sold Christmas cards door-to-door to earn money for a record player. Soon after, he bought his first record, The Beatles Revolution. Seeing an opportunity, Pavitt continued to work odd jobs and used his earnings to buy records that he would later re-sell at school.

His interest in music deepened in 1977 when he discovered Devo, then an obscure punk band from the small town of Akron, Ohio. Around this time, he also picked up a local fanzine called CLE, which featured an index of bands from all over Ohio. This epiphany would lead to a lifetime pursuit of independently produced bands, artists, and localized culture.

“A lightbulb went off in my head; small towns and cities were capable of creating great art, great music. From the summer of 1977 onward, I started to hunt for regional independent records.”

Pavitt spent time at Wax Trax! records in Chicago and read the Village Voice at the local library, where he would note the bands playing at CBGBs. He also made a fateful friendship during this time: Kim Thayil, later the guitarist for Soundgarden. Thayil was a neighbor, and played in a band, Identity Crisis, with Bruce’s younger brother, John. Pavitt eventually produced a 7“ single by the band, his first official release.

Pavitt attended Blackburn College in Illinois. During this time, his Mom, familiar with Bruce’s independent music obsession, introduced him to Carl Schneider, a local school teacher who ran Cowboy Carl Records. Carl told Pavitt about a community radio station called KAOS in Olympia, Washington, home of The Evergreen State College. Managed by John Foster,  KAOS was the only station in the country to prioritize independently released music. Foster also published OP, a magazine that focused on independent music.

In the fall of 1979, Pavitt moved West to finish college at Evergreen and connect with Foster. Conveniently, Pavitt arrived just as a DJ Calvin Johnson, later of Beat Happening, was moving to Washington DC. Pavitt took over Johnson’s “rock” time slot, playing a blend of West Coast punk and Rough Trade releases. He named his new show on KAOS, Subterranean Pop.

In 1980, Pavitt produced a ‘zine of the same name, the first to focus on independently released American rock records, region by region. The name was shortened to Sub Pop with issue #3 in 1981. He later released three cassette compilations through the fanzine that included artists like, Jad Fair, The Boneman of Barumba, and The Oil Tasters, and featured cover art by Charles Burns.

Pavitt gained distribution of his fanzine through a bold gamble. He packaged all 500 copies of Subterranean Pop #1 and sent them to Systematic, at the time, one of three independent record distributors in the US. He decorated the box with catchy graphics, so it looked like an art piece. It got noticed by manager Joe Carducci, who proceeded to sell out the entire first issue, and sent Pavitt a check.

Pavitt likes to joke that he “majored in punk rock.” But as a student at alternative Evergreen, he actually did get school credit for his work at KAOS and Subterranean Pop. Pavitt graduated in 1982 with a Bachelor of Arts degree. 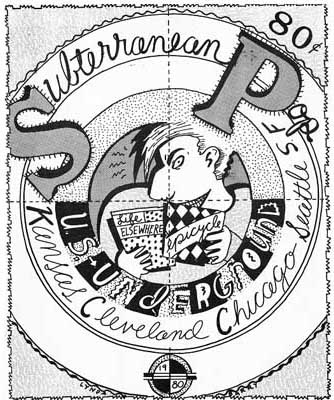 In 1983, Pavitt moved to Seattle. By 1984, he was managing Bomb Shelter, a store that sold both independently released records and skateboards. Early customers included Duff McKagen, Mark Arm, and Charles Peterson. Located in the Capitol Hill neighborhood, the store became a community hub for the punk and alternative scene in Seattle. Also this year, he oversaw the store’s release of an EP by local band, the U-Men, which sold out its 1,000-copy pressing. When the owner of Bomb Shelter closed the store, Pavitt partnered with fellow employee, Russ Battaglia, and opened Fallout Records and Skateboards a few blocks away. Pavitt left Fallout a year later, in 1985.

Pavitt also began writing a Sub Pop column in The Rocket, a monthly local arts and music paper. Continuing the theme from his fanzine, he reviewed independent music from around the country. The complete collection of these columns is available in Sub Pop USA, The Subterranean Pop Music Anthology, 1980 – 1988 published by Bazillion Points.

Also at this time, Pavitt hosted a Sub Pop radio show on the University of Washington radio station, KCMU (now KEXP). He also DJed at two local clubs, The Vogue and the all-ages venue, The Metropolis. In 1983, Pavitt was possibly the only DJ in the country spinning a set of Run DMC, Minor Threat, and The Smiths.

By 1986, Pavitt was working for Muzak, a background music distribution service for retail stores and other establishments. Also this year, Pavitt formally set up his Sub Pop record label. His first release was Sub Pop 100, a compilation featuring Sonic Youth, Naked Raygun, Skinny Puppy, Scratch Acid, Steve Albini, The U-men, and other bands he was documenting with his columns and radio shows. Pavitt kept boxes of Sub Pop 100 under his desk at Muzak, and shipped them out on the sly, from the warehouse.

In 1987, Pavitt released Green River’s Dry as a Bone. Also this year, Pavitt partnered with Jonathan Poneman, a local music promoter and fellow KEXP DJ. Encouraged by Kim Thayil, Poneman invested $20,000 for a 50% share of Pavitt’s Sub Pop label with the goal of releasing a Soundgarden EP. The new partners released a 7” single by the band before releasing the Screaming Life EP in October of that year.

Pavitt and Poneman officially incorporated as Sub Pop Records on April Fool’s Day, 1988. Soon after, the two opened a small office in The Terminal Sales building in downtown Seattle. With his knowledge of music history, and inspired by the local music scene, Pavitt, together with Poneman, modeled Sub Pop after Chess, Stax, SST, and other influential independent labels that documented a regional sound.

Pavitt made several key marketing moves in turning Sub Pop, and the city of Seattle, into a global rock music brand. One of the first was to feature Charles Peterson’s dynamic B&W photographs of live bands. In many photos, the audience was prominently framed, suggesting they were equal participants. The message was that anyone could come to Seattle and become part of the scene.

As an official business, Sub Pop Records’ first releases included a series of limited-edition, colored vinyl singles from local bands Swallow, Blood Circus, and TAD. Soon after, the label released Green River’s Rehab Doll LP. The album came out in June of 1988, despite the fact the band had broken up several months prior.

The compilation Sub Pop 200 followed in December, a boxed set of three EPs that featured 20 tracks by such Northwest bands as Tad, Nirvana, Soundgarden, Green River, Beat Happening and The Screaming Trees.

Together with Poneman, Pavitt included a glossy, multi-page insert with Sub Pop 200. It featured not only Charles Peterson’s band photos, but also a picture of Sub Pop’s “Corporate World Headquarters” – a full shot of the historic brick and terra cotta Terminal Sales Building. This image put the Sub Pop office on the map, and it soon became a tourist destination for vacationing independent music fans from around the world.

Sub Pop scored a coup when Sub Pop 200 was reviewed by John Peel, the influential BBC Radio DJ. Writing in the London Observer, Peel declared, “It is going to take something special to stop Sub Pop 200 being the set of recordings by which all others are judged.”

In November 1988, Sub Pop released a 7” single by the group, Nirvana. Not only was this Nirvana’s first release, but it was part of another Sub Pop marketing ploy. The recording was the first release of the Sub Pop Singles Club, a subscription-only series of limited edition singles.

With Sub Pop on the radar of the British press, Pavitt and Poneman decided to make a play for more global attention. They flew in British journalist, Everett True, and treated him to a week of shows and afterparties with Sub Pop musicians. The gambit paid off as True put together a two-page spread about the Seattle Music Scene in the British magazine, Melody Maker. A front-page feature of Mudhoney appeared a week later.

In 1989, as Sub Pop bands Mudhoney, Tad, and Nirvana gained traction locally, nationally, and abroad, Pavitt and Poneman organized a concert of all three bands at the Moore Theatre in Seattle. The concert was also to act as a record release party for Nirvana’s first LP, Bleach. Dubbed Lamefest, it would be the biggest stage any of the bands had played on to date. On June 9, Lamefest sold out, and Nirvana began their ascent into popular music history.

The fawning of the British press amplified the profile of Sub Pop and the Seattle Sound. Later that year, all three bands toured Europe, culminating in Lamefest UK, on December 3, 1989. Pavitt recounts the tour in a book entitled Experiencing Nirvana, Grunge In Europe, 1989 published by Bazillion Points in 2013.

By 1990, the buzz on the Seattle Music Scene was growing louder with Sub Pop’s media attention, and major label releases by Soundgarden, Mother Love Bone, and Alice in Chains. With major labels courting Nirvana, and Sub Pop’s finances in a continued state of red, Pavitt and Poneman sold Nirvana’s contract to DGC for a reported $75,000. Soon after, Nirvana rocketed to stardom with the release of Nevermind in September, 1991.

Pavitt’s quote in Subterranean Pop #1 was finally realized as Nirvana overtook Michael Jackson for the number one spot on the Billboard charts. In the deal with DGC, Sub Pop’s logo was printed on every album, and the label received royalties for each copy sold. The windfall dramatically altered Sub Pop’s financial outlook. Pavitt was soon deluged with interview requests as Seattle became ground zero for Grunge and Alternative Rock.

Riding the wave of Grunge, Pavitt and Poneman sold 49% of Sub Pop to Warner Brothers for a reported $20 million dollars in early 1995. Never ones to lose their sense of humor, during a period in which the Seattle Music scene was thoroughly fried by major labels, money, and the national spotlight, Sub Pop printed the slogan, “We sold out first!”

In 1996, Pavitt left his day job with Sub Pop. Contributing factors in his decision are reported to be disagreements with Poneman on the direction of the label’s future, and the change in business culture following the sale to a major label. Pavitt eventually sold his remaining shares of Sub Pop to Poneman.

As founder of Sub Pop, Pavitt is regarded as a cultural visionary and Seattle business icon.  His footprints have been bronzed and embedded into the Walk of Fame sidewalk at 6th and Pine in Seattle, alongside Jimi Hendrix and Bill Gates. In 2013, Seattle recognized the 25th year anniversary of Sub Pop with a celebration atop the Space Needle, including a live concert by Mudhoney. Today, Pavitt and the Sub Pop story are part of music history, chronicled in books, documentaries, recorded interviews, and the Museum of Pop Culture in Seattle.