Experiencing Nirvana is a photo journal, grunge rock micro-history, and an inside look into a crucial eight-day period in the touring life of Nirvana, created by Sub Pop founder Bruce Pavitt. 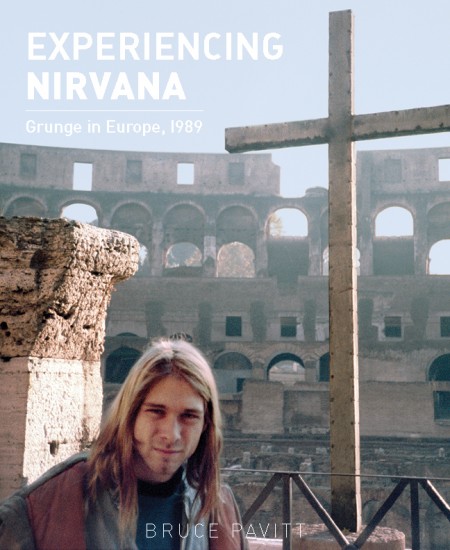 In the last days of 1989, pre-fame Nirvana goes from breaking up in Rome to winning over the influential British music press at Sub Pop’s LameFest U.K. showcase in London, setting the stage for their imminent popularity. At the end of a grueling six-week European tour to promote their Bleach debut, the band was exhausted, with singer Kurt Cobain frustrated and downcast. Despite a stolen passport and an attempt to leap from a 14-foot speaker tower, Cobain managed to continue to London. Opening for Tad and Mudhoney at the Astoria Theatre on November 27, 1989, Nirvana’s heart-pounding performance won over the crowd. The powerful London music press proclaimed Nirvana to be “Sub Pop’s answer to the Beatles.” Within two years, the band would become the biggest rock act of their generation. This is the photographic story of the breakthrough that almost never happened.

“The previously unpublished photographs show a young Kurt Cobain, wild-eyed and volatile in some photos, shyly happy in others. The candid shots follow the group as they made their way from Rome to London.”
—Rolling Stone

“After signing Nirvana to Sub Pop, Pavitt took the band on its first European tour in 1989, with opening gigs for label mates Mudhoney and Tad. With his Olympus pocket camera, Pavitt took countless shots on that eight-day Europe trip. Photos from venue stages and inside dressing rooms shed some light on a 22-year-old Cobain.”
—CBS News

“Pavitt’s photos, taken on the fly with a pocket-sized Olympus, reveal a would-be superstar still in development. Experiencing Nirvana finds Cobain free of the burden of fame that would plague him only a few years later.”
—Entertainment Weekly

“The book is amazing, and so perfectly representative of that time. I swear, looking through those pictures brought me right back to being in a cold, damp van with a bunch of smelly musicians, having the time of our lives!”
—Dave Grohl

“For over thirty years Bruce Pavitt has been at the vanguard of popular culture advancing social and artistic trends, ideas, and movements within the community of the innovative and alternative. Experiencing Nirvana is part rock ‘n roll travelogue and part voyeuristic pop culture rubbernecking—an unromantic yet nostalgic glimpse into a rock social movement just prior to its explosion.”
—Kim Thayil, Soundgarden

“One of those perfect records of music history that galvanizes the pedestrian as easily as the aural devotee.”
—Dangerous Minds

“The book reveals a side of these bands that most fans have not seen: unknown, homesick, silly, and brimming with the unpolluted exhilaration of impending success. The result is a raw portrait that is free of the rock star mythologizing that kicked into gear as soon as Nirvana signed to Geffen Records.”
—Forbes

“Arguably the best and most revealing new book on Nirvana…The book is refreshing because it doesn’t care about “Teen Spirit” or Nevermind; barely mentions Courtney Love, heroin, or suicide… Here, in this snapshot of pre-celebrity life, Pavitt finds a sliver of humanity.”
—Pitchfork

“For some strange and inexplicable reason, none of these photos from the tour have been published in print until now…. Put on your smiley-faced shirt with X’d out eyes, crank upBleach, and enjoy.”
—Vice

“Experiencing Nirvana is an interesting and breezing read and a must-have for any grunge or Nirvana fan. It gives a unique perspective on the time period told through the words and photography of the people who were there.
—Popmatters

“Sub Pop co-founder Bruce Pavitt chronicles the long ride across Europe, documenting every victory and speed bump along the road to a vital but unsung event that would change the face of rock ‘n’ roll.”
—Creative Loafing

“The realities of life on the road – stolen passports, the blur of faces, the hanging out and around – are all present, but so too are the in-your-face excitement of a great gig and the anything-can-happen optimism of youth. You’ll think of your own throughout and wish you were there.”
—RTÉ (4.5/5 review)

“It’s nice to glimpse Nirvana—unsure it was doing the right thing and unimpressed by the Coliseum—before the madness of Rocky-like success enveloped the band.”
—Paste

“It is one man’s document of the not so calm before the storm, a unique pictorial essay capturing a fledgling band developing into one of the most vital bands of our time… It doesn’t get much more intimate and authentic.”
—Louder than War

“Experiencing Nirvana also provides another important aspect of that band’s early life: Nirvana as an independent act on an independent label. Pavitt’s words and photos effectively present this other side of Nirvana, to fans only familiar with the post-Nevermind version of the band.”
—Stephen Tow, The Weeklings